Bolshoi Ballet and Spartacus at The Royal Opera House, London

Posted on August 11, 2019 by faithgoeswalkabout 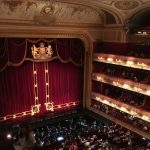 Spartacus the ballet was performed over three weeks this summer. I was lucky to be there for the opening night and the performance by the Bolshoi Ballet was stunning beyond words. This is a ballet full of emotion and hard gritted determination of Spartacus and his followers in the complete strength of the Roman Army in Italy. A full three hours of energy,passion, ballet like I had never seen, dance and gymnastic skills which were perfection, either as a group or individuals.

‘The Bolshoi Ballet returned to the Royal Opera House for another exciting three-week season of spectacular ballets presented by Victor Hochhauser, beginning with Yuri Grigorovich’s Spartacus.

This sensational staging, first performed in London in 1969, is a Bolshoi classic, displaying the energy and power of the company’s male dancers.

Spartacus leads his rebellion of gladiators and slaves against the rule of empire in ancient Rome – an epic uprising that brings marching battalions, mortal combat and heroic death scenes.

Performing Khachaturian’s thrilling music, the Orchestra of the Bolshoi Theatre accompany these performances.’

Further information about the dancers can be found on the Royal Opera House website.

The 150 players in the orchestra were incredible and gave more than I can describe to the energy and passion of this performance.

The principal and soloist dancers were completely stunning and the full audience in the Royal Opera House  were silenced in awe and wonder.

Sometimes it is so good to leave all words behind, and yet feel the amazing energy that life has. This ballet gave so much to the audience and without any words at all, we all left knowing the story and feeling deep within us the hurt and anguish of the life of the slaves.

To know the feeling that is caused by such an outrage as slavery can only help to know and to understand that we all need to leave behind such horrors and reconcile them to the past.

In creative works of dance, art and music we can sense more than we can say and we can glimpse an awareness of life beyond our own understanding.