A journey into South East Asia from Hong Kong. We journeyed from Saigon to the centre of the country, Hue and then HoiAn. 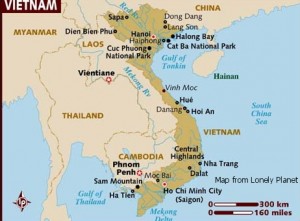 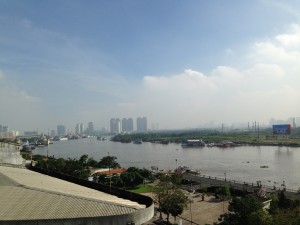 There is something inherently romantic about the name Saigon and maybe that’s why in many places it is still called by that name. Ho Chi Minh City is the new style and his image and ‘way forward’ are evident across the city. 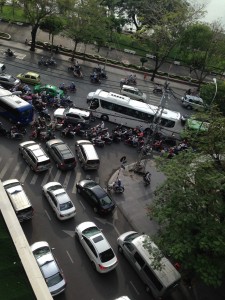 Apparently, there are 5 million motor bikes in the city! And on the trip from the airport to the hotel the whole world of Saigon travels gently and noisily around on any area of the road and carrying any type of passengers and loads; 4 children are more than possible, a new fridge,  boxes of stuff tied on making the whole thing unstable.

The Hotel Majestic is by the bank of the river and is ex colonial and beautiful. The welcome was an indication of the Vietnamese peaceful and calm ways. The view from the small balcony of  first the traffic and then the river with the old barges travelling from the industrial areas up an down the river was incongruous   with the gaudy lit restaurant boats moored by the bank. On the opposite bank there was nothing but green spaces and some large advertising hoardings.

The following day we walked in to the city and did the usual visitor things, including amazement about crossing the road…. No need to check if anything is coming as there always is and they don’t stop, so a meander into the road full of traffic which then just wanders around you, carefully missing you so long as you don’t stop walking.

It was goodbye to Saigon, in the taxi for 6 and all the luggage on the way to the airport for the domestic flight to Hue. A really good flight on a huge plane for 1hr 45 mins. 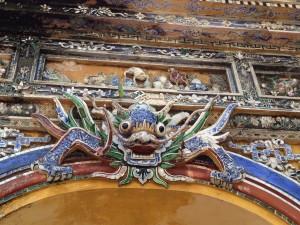 Hue is a small town and famous for the Forbidden City and in being home to the Blue Dragon. It was the capital of unified Vietnam in 1802 and was the cultural and religous centre under the Nguyen dynasty until 1945. The Perfume River goes through the city and near the Forbidden Purple City.

As we arrived that night our taxi from the airport had left us over the bridge and in the grounds of an excellent hotel, La Residencia, which was built in 1930’s and was Art Deco through out, with a warm and very large swimming pool! From our room I could see the Mausoleum on the other side of the river with the red flag of Vietnam flying high. 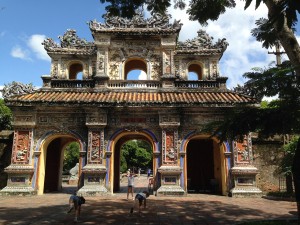 The next day we went into the Forbidden City, which was looking quite run down, although the buildings that were left were golden and striking blues and purples. The city had spread over 20 acres, but as it was the original city, much had been lost to the bombing of the American War.

Although it was very hot and humid, we strolled through the edge of the town, the people were delighted and the women seemed to have a canny eye for providing meals on the road. 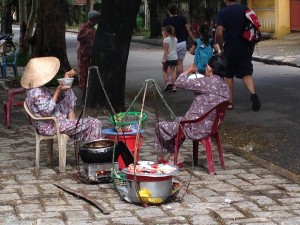 There is also a strong French influence still and even some of the house number signs are the type that you would see in France. 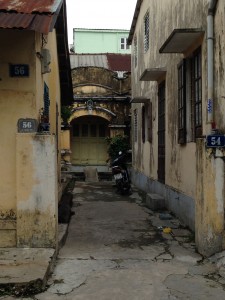 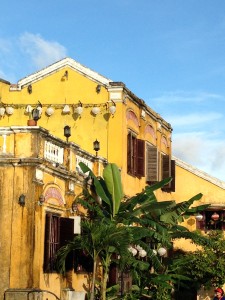 Hoi An was more touristy, than Saigon or Hue, and the enterprising women on bikes appeared from nowhere to sell you a plastic cape when it started to rain or new shoes if it was dry

Bikes were the transport to have and took many different shapes, but they all had bells and after a day to acclimatise we joined the bikers through the markets,down the side streets and across the river.

Our first night saw us in the middle of a monsoon downpour and the water from the road, then pavement started to get very close to the open doors of the restaurant, well about 6 inches. The restaurant, The White Orchid was a social scheme to help young people who had very little education to have a job and career. It was great and quite typical of the social aspect of Vietnam that underlies the country and the people, never pushy, just happens. 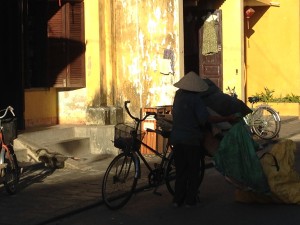 The market was set beside the river and the crowded, smelly and noisy covered area was full of different fruits, vegetables, spices, sea food, meat, and clothes. All members of the family were there and working and talking all the time. By the river, the fruit would be washed and brought into the market. 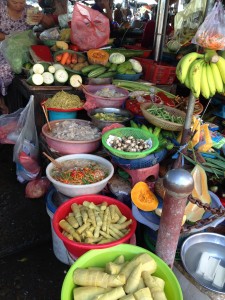 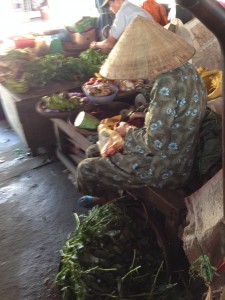 Not sure if that didn’t put me off entirely from eating the fruit, or maybe it really was just a muddy river. 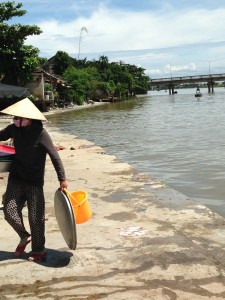 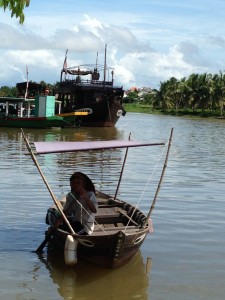 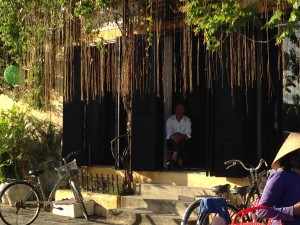 The river was edged by deeply 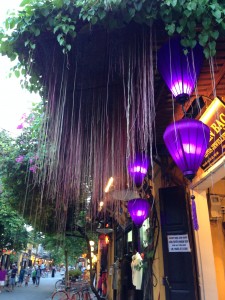 colourful buildings and in the evenings, the lanterns were the only source of light, the colours of blue, purple and yellow gave a real atmosphere.

The memories that remain with me most about Vietnam are the River in Hoi An, the colours, the people, their resilience and their happiness which hides a  huge range of talent and community along that river bank.

Affability is certainly not a weakness in Vietnam. 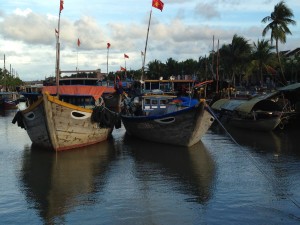 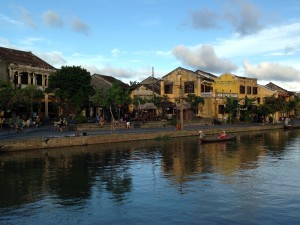