First impressions are of the vastness of the buildings, they reach into the sky.

On a clear day the Central district of Hong Kong Island is impressive. The streets are narrow and the highways are busy, traffic includes double decker buses, taxis and large fast cars, along with ordinary cars and older ladies pushing wheel barrows of large amounts of stuff.

But everyone is in a rush.

I was met by Becca, Emily, Livvie and Eve and we traveled back to their new apartment at Tai Tam, on the south side of the island, near to Stanley. 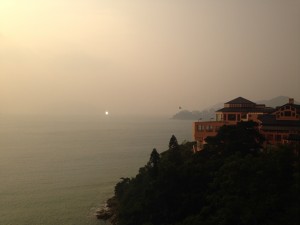 The view from the apartment is of the South China Sea and islands beyond.

After two days of acclimatising and getting to know the places around Tai Tam, we went to Disneyland Hong Kong.

Wow!! An explosion of experiences, full of colour, Disney characters and every dream place you could think of. Maybe there’s some writing to be done on the fairy tale world that Disney creates, the way you can walk straight in amongst new worlds and let your imagination take over. 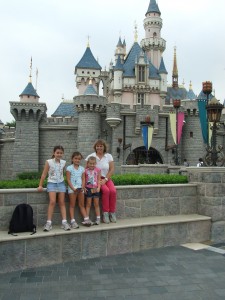 It was a hot day for me, with temperatures around 28C. The city was shrouded in a pinkish glow and hard to see as we crossed the bridges to Lantau, but Disneyland itself was clear.

The fairy castle, Toy Story land, Mickey Mouse and Alice in Wonderland all part of the

huge Disney experience… and the happy Disney music on every street corner mixed with the larger than life characters encouraging you to have a great day was truly amazing.

At the end we stayed for the grand parade, colour, explosion of dancers, experiences and music. 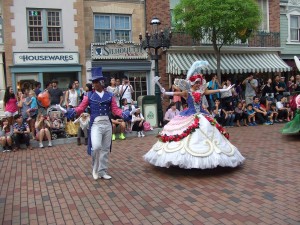 All that Disney could offer parading in the main street of the pretend Wild West town.

Had a real Pied Piper feel about it as children  joined in with the dancers in the street.

A fairy tale adventure of a day.

One of the least expected things for me was the amount of natural walks and trails across all parts of Hong Kong Island. The island itself has a startling contrast of natural parks and then the largest city blocks imaginable in parts of Central, Aberdeen and Admiralty. 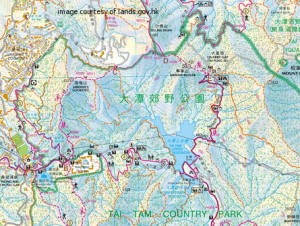 But the long walks over the hillsides, reach to over 400 metres on places such as Jardine’s Lookout and Mount Butler. There are many short walks as part of the trails and we took a walk through Tai Tam Country Park on a warm early morning. The Enjoy Hiking The Hong Kong Trail gives a good idea of the terrain and variety of the walks. 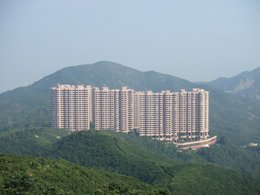 Landmark buildings in the hazy sky include IFC and the Bank of China on Hong Kong Island.

In the base of the picture you can see Park View. 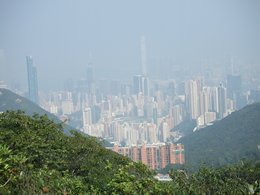 South side of Hong Kong Island, with Tai Tam reservoir below.  Closer to the reservoir we saw the first of some wonderful butterflies, large, black with vivid blue or range markings. 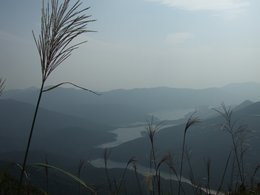 Lantau and the Big Buddha 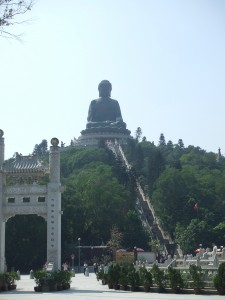 Lantau is a large island just to the west of Hong Kong Island. A large bridge connects the islands and also Kowloon side. We were going to venture to the Big Buddha and took a ferry from close to the Star Ferry terminal, across to the island of Lantau. This was not the normal tourist route and the ferry sped across to the island and we landed at Mui Po.

Mui Po was a quiet sleepy sort of place and the buses only came every hour so we called for a taxi, which arrived in about 10 minutes. It turned out to be a good way to see the island as the road took us along the souther edges, before turning inland to climb up to see the Big Buddha.

In Hong Kong nothing seems to start early and so we arrived through the gate of Po Lin monastery and the new shops and stalls before many other people had arrived. So we fortunately  missed all the music and tourist stalls selling min buddhas and souvenirs.

Po Lin monastery is set in some beautiful countryside. The Tian Tan Buddha statue (informally, the Big Buddha) was erected in 1993. Sitting 34 metres high, facing north looking over the Chinese people, this majestic bronze Buddha draws pilgrims from all over Asia. 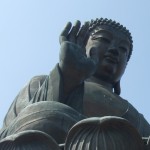 St John’s Cathedral and the Archbishop of Canterbury 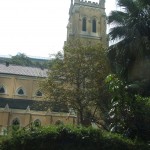 In complete contrast we went into Central on Sunday to attend a Eucharist with the preacher being the Archbishop of Canterbury! Coincidence and just my luck to be able to go with Becca and attend a packed cathedral and listen to the Most Reverend Justin Welby. A very interesting sermon and he was actually just on a stop over between London and South Korea.

Ah, well…. I had only ever thought of having a shower and relaxing on a stop over! 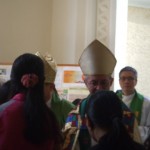 Outside the cathedral in the gardens we were immediately amongst the chattering voices of people, who were on their day off from household duties. The women from the Philippines who support the families and do so much.

And to my honour I was asked by Ging, if I would preach at her church in Hong Kong on my next visit. 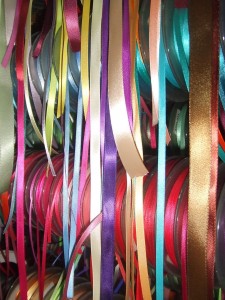 On my penultimate day we decided to venture to the ribbon market and buttons and fabric and some kind of haberdashery heaven.

We took the MTR to Sham Shui Po, quite a different part of Hong Kong, with tower blocks and signs over the streets, barrows returning the cardboard boxes everywhere. Along with the stalls, there were streets full of long thin shops, full of racks of everything you could ever wish for in ribbon, buttons and fabrics.

Essentially they are wholesalers and distribute vast amounts of ribbons etc, buying them in from China and sending out to all over the world and to anyone who wants to buy!! Each shop seemed to specialise and on the ribbons, for example there was a shop just selling shiny and sequin ribbons, or another selling petersham and braiding.

We managed to come away with a quantity of ribbons for a very little money.

Great experience and somewhere to go back to.

And so, early on Wednesday morning, I said a sad farewell to Emily, Livvie and Eve and Becca drove me to Admiralty to check in and then catch the fast train to the airport.

Always hard to leave, and it is still along way to go, but at least it can be done and I can look forward to going back in the New Year sometime.

As the train sped along in style to the airport I thought of my journey at the other end in the UK, from Heathrow to London, on the Piccadilly line. It wasn’t going to be quite the same! 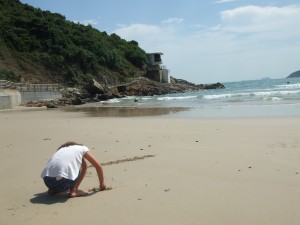