Thomas the disciple and Paddington the Bear

Posted on April 9, 2018 by faithgoeswalkabout 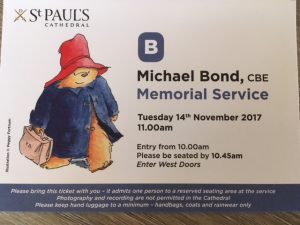 Michael Bond was the author of the Paddington Bear stories, apart from Paddington 2 as he died last year.

I was very fortunate to have gone to his Memorial service at St Paul’s Cathedral. It was amazing and many famous people spoke of Michael Bond and also of his most loved character, Paddington.

Preaching at St Paul’s, the Precentor of St Paul’s, Canon Michael Hampel suggested that Paddington’s story was a “kind of parable…. The wisdom of the world is turned on its head and a refugee bear who is accident prone and clearly very different from everyone else around him came to exemplify a very different kind of wisdom. It’s one that says being different is ok: that being cast adrift in the world requires the human response of rescue and that accidents happen, because we are all human.”

Some phrases in there…

A kind of parable,

The wisdom of the world is turned on its head

A refugee bear… is clearly very different from everyone else

Exemplifies a different kind of wisdom

And accidents happen because we are all human (although Paddington was actually a bear!)

Thomas and the disciples were all human, so like us believing without seeing is often hard.