Posted on November 12, 2017 by faithgoeswalkabout 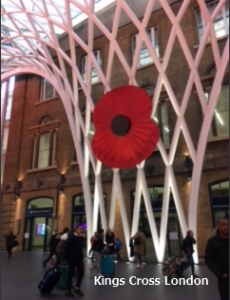 If we do not remember it can happen again

I think myself as lucky for being part of a generation that has not known war close at hand. But I have know the effect on lives of people close to me, through injuries, illness and often very long term effects of all aspects of war.

Many  have experienced war, both in the past and in recent times.

Nowadays we are always reminded about wars in different parts of the world.

Our toll of lives lost across the world goes on, more soldiers and air personnel killed, more people back home  having lost someone very close to them.

But today is about remembering, Remembrance Service, held every November to mark Armistice Day, the marking of the symbolic end of the First World War on November 11th 1918. And special today as we are here on November 11th.

The cruelest of wars which lasted from 1914 – 1918. A war fought in the most abysmal of conditions and with such an enormous waste of life.

If we remember we hope it will not happen again.

If we do not remember it can happen again

This entry was posted in Sermons, Uncategorized and tagged gayton group of parishes, norwich diocese, Remebrance Sunday. Bookmark the permalink.